A Circus of Humanity

Walk into any of the well-known parks around Shanghai and the sights and sounds of people enjoying the ‘circus of humanity’ will overwhelm you. For the elderly and the ever so young, the park is a lifestyle; a time to get together under the big top of green leaves and enjoy life together. Early in the morning, these parks teem with sights and sounds of a circus.

The ballroom dancers move in unison, being coaxed by the dictatorial dance master (Dance lessons every morning 7 to 9:30, the poster advertises) Like an ever-rolling wave along a beach, the dancing mass moves up 1-2-3-4 and then down 1-2-3-4 and then back up 1-2-3-4. To the couples that cannot keep in step, the “ringmaster’ barks his displeasure over the blare and feedback of the up tempo tango music.

In a quieter corner, the Tai Chi ren go through their somnambulistic movements in line, in unison and in silence. Their pastel colored ‘pajamas’ billow in the breeze as they move together like a slow flowing river following its course on its way to tranquility.

Across the paving stones floats the sharp, lilting sound of a female voice mingled with the solemn rhythm of a lonely erhu entwined in a sad lament. Cheerless and cheery songs are sung under the dabbled shade of the trees along the path that wends its way along the banks of the lake.

A new father cradles his baby son, sharing a moment of love and affection. Behind his smile the fear and uncertainty that envelopes new fathers everywhere, thinking and wondering about the new future that he will share with the precious life he holds gently and lovingly in his arms.

With their very own ring, the cultural revolutionary choral singers sing at the top of their lungs about their great country, their great helmsman and their great leap forward. Full of verve and gusto the chorus swells and push out their collective chests of their illusionary Mao jackets. This is more than letting a 100 flowers ‘boom’! An animated chorus master conducts the performers, his arms rising and falling with the music and singing along for the shear joy of being part of the music.

Watching from the benches are those taking time out from the furor of the centre ring of the circus. Old friends sit shoulder to shoulder purveying all the fun of the fair in front of them. They comment on the performers; chat and reminisce about days gone by; gossip about the Wangs of the world or catch up on a few winks.

However, as swiftly as they arrived, 9:30 signals the end of the show and so the park empties like a lake with the weir gates opened. Out into the world they go, only to return like the tide tomorrow to do it all over again. Like the relentless sea, the old and the ever so young always return, because tomorrow is another day at the circus of humanity.

Singing in the Park 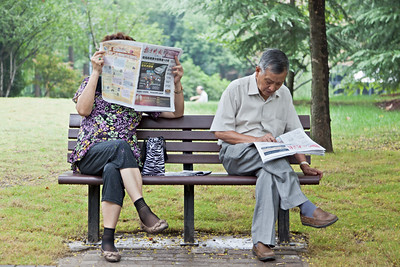 Dancing in The Park

Walking in the Park