About Me - Philip Goldberg 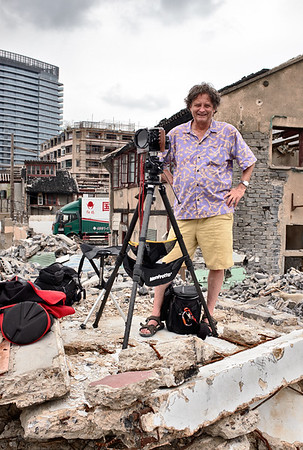 Every photographer has a mantra, and my mantra is: It's all in the printed photograph. With today's snap and up-load mentality, we have gotten further away from what photography is about and it's about the print. A good photograph should be a physical image that causes you to look a second or third time. It should also be an image that arrests your subconscious, touches your emotional center, fascinates your imagination and it should pull you up sharply. That is what is known as the decisive moment.

My journey in photography began when images appeared in a tray and had to be fixed. The hours spent in the dark put you in a creative zone in which life did not impinge and the only life was the one that you breathed into the photograph under the concentrated light of an enlarger. In those days, my trusty Nikon F was not only my camera of choice; it was the only one I could afford. As a native of Detroit, my camera, car and curiosity were my holy trinity in my wanderlust for good photographs. Older and hopefully wiser, my photography is now digital. The Nikon now sits on the shelf, but next to it are my modern digital cameras: Canon, Leica,  Mamiya, as well as tech and field cameras. However, I still compose the shot.

There are many other photographers who believe in the craft of the printed image, which is the reason why, I have been commissioned several occasions to print for their exhibitions in China and Berlin. I trust that the photographs that you have viewed in my galleries embody my belief in photography.

If you have seen a photograph that you would like to own or if you are a fellow photographer looking for a good printer then please contact me. I still believe that the printed image is the end game in photography. A good photograph, is about making decisions, planning and being prepared, because as the saying goes; 'fortune falls to them, who are prepared for chance'. Thanks for viewing.

I can be contacted by email at alajuela@msn.com if you have any questions or would like usage rights to any of the photographs on this site.